Sweetening as much as you like, and all of it calorie-free and natural? Although it sounds like wishful thinking, this has now become possible. With the approval of Stevia by the European Union, the wishes of all people who like to eat sweet things have come true.

Extremely sweet, low in calories and plant-based: for those who want to snack healthily, Stevia seems to be the alternative. And indeed, you can already find the sweetener in many food products.

It's no big secret that sugar is unhealthy. Sugar makes you fat, is bad for your teeth and is full of empty calories. High sugar consumption can lead to diabetes. Few people, however, want to give up sweets completely. But there are healthy alternatives and Stevia is one of them.

Is Stevia a suitable sugar substitute?

Stevia is the name of the sugar alternative and is extracted from a plant. The plant-based sugar alternative Stevia offers many advantages over conventional sugar. It is tooth-friendly and does not lead to tooth decay.

Diabetics can also eat foods sweetened with Stevia without negatively affecting blood sugar levels. Since Stevia has almost no calories, there is also no danger of getting fat from it. The sweetener can support weight reduction in the context of diets. 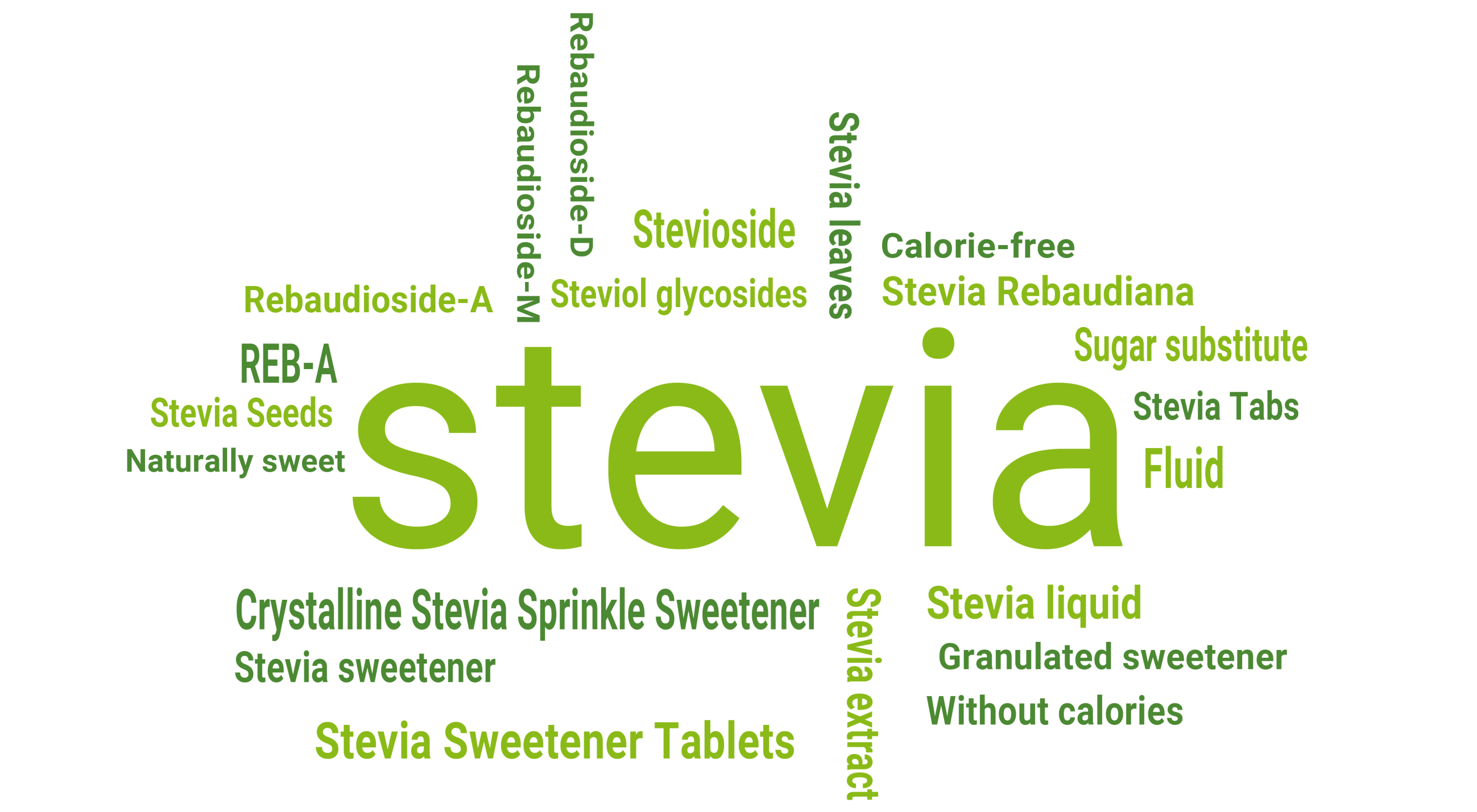 How is Stevia used?

Like other sweeteners, the sweetener Stevia is used as a sugar substitute. Today, the powder (extract) from the Stevia plant can be found in many foods. Besides cola, there are many manufacturers who use Stevia in sweets, gummy bears, iced tea, yoghurts, ketchup, pickle jam and chocolate.

The sweetener from the Stevia plant is also available as a tablet sweetener as a liquid sweetener, sweetener tablets or as a powder.

How much sweeter is Stevia than sugar?

Be careful when using it, as the sweetener from the plant is up to four hundred times sweeter than normal household sugar. Therefore, a 1:1 substitution of sugar with Stevia is not possible. The result will not be edible and tasty. However, if you want to cook or bake with the sugar substitute, you should look for the right recipe.

Sugar cannot be replaced 1:1 by pure Stevia. Because the extract from the Stevia plant behaves chemically and physically differently than sugar. Sugar and Stevia do not brown in baking. Therefore, recipes have to be adapted.

With jelly, jams and marmalades, you have to bear in mind that sugar has a natural preserving effect and this is missing. Here, gelling sugar or, even better, the use of apple pectin helps.

To achieve the same result as with sugar, it is important to process Stevia correctly. Special recipes and possibly additives can help here. You can find good Stevia recipes on the internet under Stevia cookbooks with which you can also cook and bake with Stevia and thus replace sugar.

What makes Stevia different from other sweeteners?

Stevia is a natural product unlike the sweetener’s aspartame, cyclamate, saccharin and sucralose, which are synthetically produced. However, Stevia is not the only one of the natural alternatives. Erythritol and xylitol is also a natural sugar substitute.

However, erythritol and xylitol have a much lower sweetening power (only 60-70%) compared to sugar. Therefore, erythritol in particular is mixed with pure Stevia extract to achieve a dosage 1 to 1 like sugar. This makes this product particularly easy to convert to sugar.

What you should know about Stevia

On 2 December 2011, sweeteners made from Stevia were officially approved throughout Europe. Unlike conventional artificial sweeteners, Stevia contains almost no calories. Moreover, Stevia is not produced in chemical laboratories, but is made from the ingredients of the plant of the same name.

The sweeteners made from Stevia are of natural origin. The leaves of the Stevia plant contain so-called steviol glycosides, which are about 30 times sweeter than conventional sugar.

However, in new sweeteners in the form of tablets or powders, the sweetening power is not quite as intense, as steviol glycosides must be extracted according to EU regulations and must have a purity of at least 95% during the production process.

In order for Stevia to be used like sugar, a solution was sought for a long time that would achieve as similar a consistency as possible.

In the meantime, so-called carriers, mostly polyols, sugar substitutes, are added to the steviol glycosides for this purpose. Some polyols such as erythritol occur naturally in foods such as mushrooms, melons and algae.

Polyols are carbohydrates, but not sugars. Part of their chemical structure is very similar to sugar and another part to alcohol. Polyols are neither sugar nor alcohol, but are also called sugar alcohols.

The result is a sweetener that can be used 1-to-1 like sugar with up to four times the sweetness of household sugar.

This extremely sweet plant originally comes from Paraguay. It has been used as a sweetener by the indigenous people there for centuries.

Scientists first discovered and studied this plant at the end of the 19th century. In the 1960s, Stevia was also planted in Japan for the first time. Today, most of the raw materials for sweeteners made from Stevia come from China. Stevia is now grown all over the world and is available all year round.

The taste of Stevia

By nature, the leaves of the Stevia plant have a liquorice-like flavour, but this is almost absent in the sweetener made from them. Some people have a particularly fine sense of taste and still feel a certain aftertaste when they use Stevia for sweetening.

Often, however, this is due to a lack of quality or an overdose of the Stevia extract used. This can lead to an unpleasant bitter aftertaste.

For allergy sufferers, it is especially important to check the ingredient list carefully. Many Stevia products are enhanced with certain fillers or carriers for better dosage.

These substances can include fructose, glucose, lactose and maltose, maltodextrin, for example, which can cause some intolerances in sensitive people.

When buying Stevia, look carefully at the list of ingredients: Sometimes sugars such as maltose are used as a carrier substance, which can add as many calories as table sugar.

When buying Stevia, check the list of ingredients carefully! Manufacturers often add sugary substances such as dextrose, fructose, glucose, lactose, maltodextrin or synthetic sweeteners to their Stevia products. These often have just as many calories as household sugar.

Whether in tablet, liquid or powder form, the factors that influence the quality of a sweetener are its purity and composition.

The compound rebaudioside A is considered to have the best sweetness and taste at the same time. Therefore, Stevia products with a higher content of rebaudioside A are also of higher quality.

Stevia sweeteners are particularly sensitive to moisture. Therefore, always use tightly closed containers for storing Stevia powder or Stevia tablets and store the product as dry as possible.

Stevia is temperature-stable up to about 200 degrees Celsius and is therefore suitable for baking and frying biscuits, biscuits, cakes or pancakes to a certain extent. However, dough sweetened with Stevia hardly browns because it lacks the sugar crystals that caramelise when heated.

The maximum temperature stability of Stevia is about 200 degrees Celsius. Therefore, the sweetener is also suitable for cooking and baking. However, dough sweetened with Stevia hardly browns because it lacks sugar crystals that caramelise when heated. We recommend using sprinkle sweetener a mixture of erythritol and Stevia.

In addition, the volume of the sweetener Stevia is less than that of sugar, which can lead to poor baking results. Again, we recommend using a blend of erythritol and Stevia as a sprinkle sweetener.

For example, biscuits and sponge cakes have a high sugar content. However, Stevia is very suitable for kneaded and yeast dough. There is another limitation when cooking jelly and marmalade with Stevia: the shelf life is much shorter than when prepared with sugar.

As long as you follow the manufacturer's instructions and their dosage recommendations on the respective products, Stevia is an almost perfect alternative to sugar. Stevia is ideal for sweetening tea and coffee, but can also be used in liquid, powder form and as a sprinkle sweetener in yoghurt, rice pudding, quark dishes, fruit salad, smoothies and puddings.

The dosage of Stevia

However, due to the intense sweetness of pure Stevia extract, you should be careful when dosing. Using a blend of erythritol and Stevia is easier and can be converted 1 to 1.

Why does Stevia sometimes have a bitter taste?

In high concentrations, the natural sweetener sometimes produces a bitter taste similar to liquorice. The structure of the glycoside molecules is the decisive factor for the degree of sweetness or bitterness of Stevia. The more glucose is bound to this molecule, the less bitter or sweeter the product tastes.

Where can I buy Stevia?

Stevia powder can be bought in many places. Among others, it is offered in various supermarkets and drugstores. Stevia is also available in many health foods stores as powder, liquid extract or tablets. Stevia extract can also be bought on the internet. By the way, you can find not only the powder there, but also Stevia plants and dried leaves.

If you want to focus on a health-promoting diet, you should fundamentally rethink your relationship to sugar or artificial sweeteners. Because if you always reach for sweets, especially drinks, lemonade, etc., you will get used to it.

This has nothing to do with whether the lemonade contains sugar or substitutes. That is why we recommend unsweetened drinks especially for children and young people. As a healthy drink, it should be water. People who had a lot of sugar-sweetened drinks in childhood have a higher risk of becoming overweight.

But even with a healthy diet, it is not necessary to give up sweets completely. However, it makes more sense to eat less 'normal' sugary sweets and to pay attention to the sugar content.