Stevia rebaudiana Bertoni is a small, shrubby plant and belongs to the composite family (Asteraceae or Compositae). The Stevia plant is native to Paraguay and prefers sandy soils near water. In the wild, the Stevia plant can reach a height of up to 75cm.

Stevia rebaudiana Bertoni is the Latin name of the Stevia plant. It is composed of the genus name Stevia, the species name rebaudiana and the subspecies name Bertoni.

There are over 150 other Stevia plant species, of which only the Stevia rebaudiana species contain the sweet steviol glycosides. This Stevia plant species is therefore also called sweet leaf, honey herb, sweet herb by the indigenous people, the Guarani and Mato Grosso Indians in Paraguay and Brazil. In the Guarani language in Paraguay, the sweet herb is also called caá jeé, kaá heé, or yerba dulce.

The botanist Moisés Bertoni was the first to discover the sweet constituents of the Stevia plant. The individual components of the Stevia leaves, the steviosides, the rebaudiosides A to F were analysed and broken down by the chemist Ovidio Rebaudi. 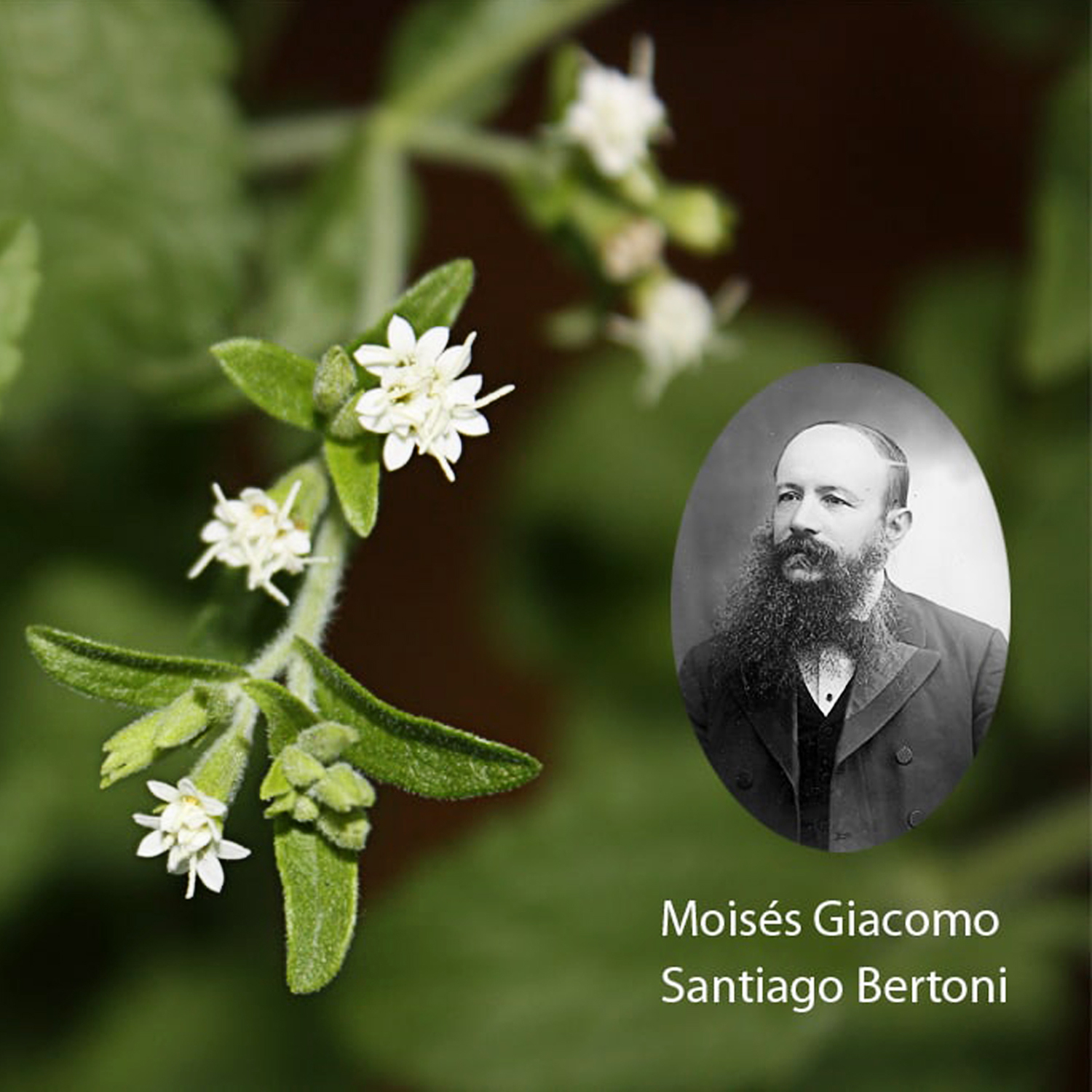 The origin and distribution of Stevia

The highlands of Argentina, Brazil and Paraguay from the 22nd to 23rd southern latitude and the 55th to 56th western longitude are the natural home of the Stevia plant.

The soil conditions and the moderately humid climate in the border region between Argentina, Brazil and Paraguay, with an average annual temperature of 21°C and an annual precipitation of 1500 to 1800 mm, form an ideal distribution area for the Stevia rebaudiana plant genus.

The sweet Stevia species grow particularly well on the sandy, acidic and clayey plateaus of the Amambai, in the state of Mato Grosso do Sul in the border region between Brazil and Paraguay. 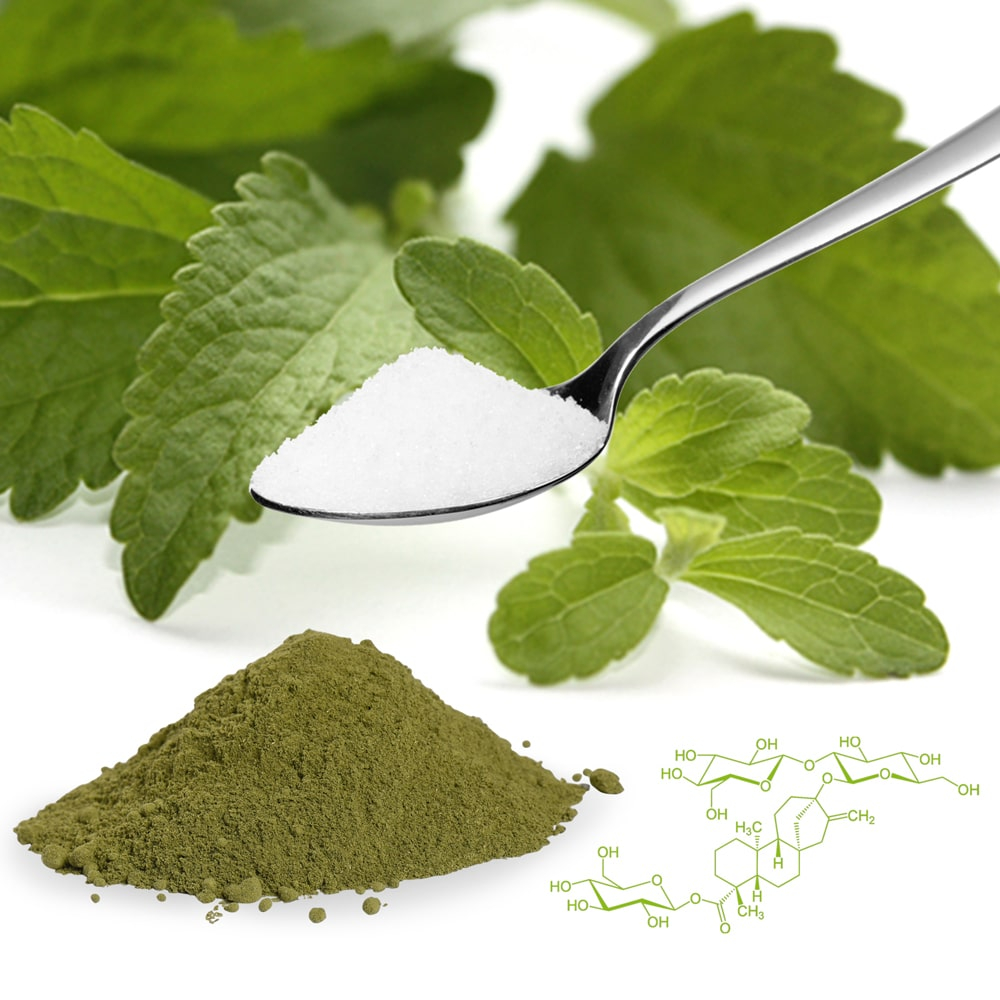 Dried Stevia leaves are 20 to 30 times sweeter than sugar and the extract obtained from them, steviol glycosides up to 300 times sweeter.

Other ingredients of Stevia leaves

Stevia rebaudiana leaves are a good source of proteins and carbohydrates. The content of inorganic minerals is attributed to the high ash content. The minerals and secondary plant compounds contained in the Stevia leaves are also important. 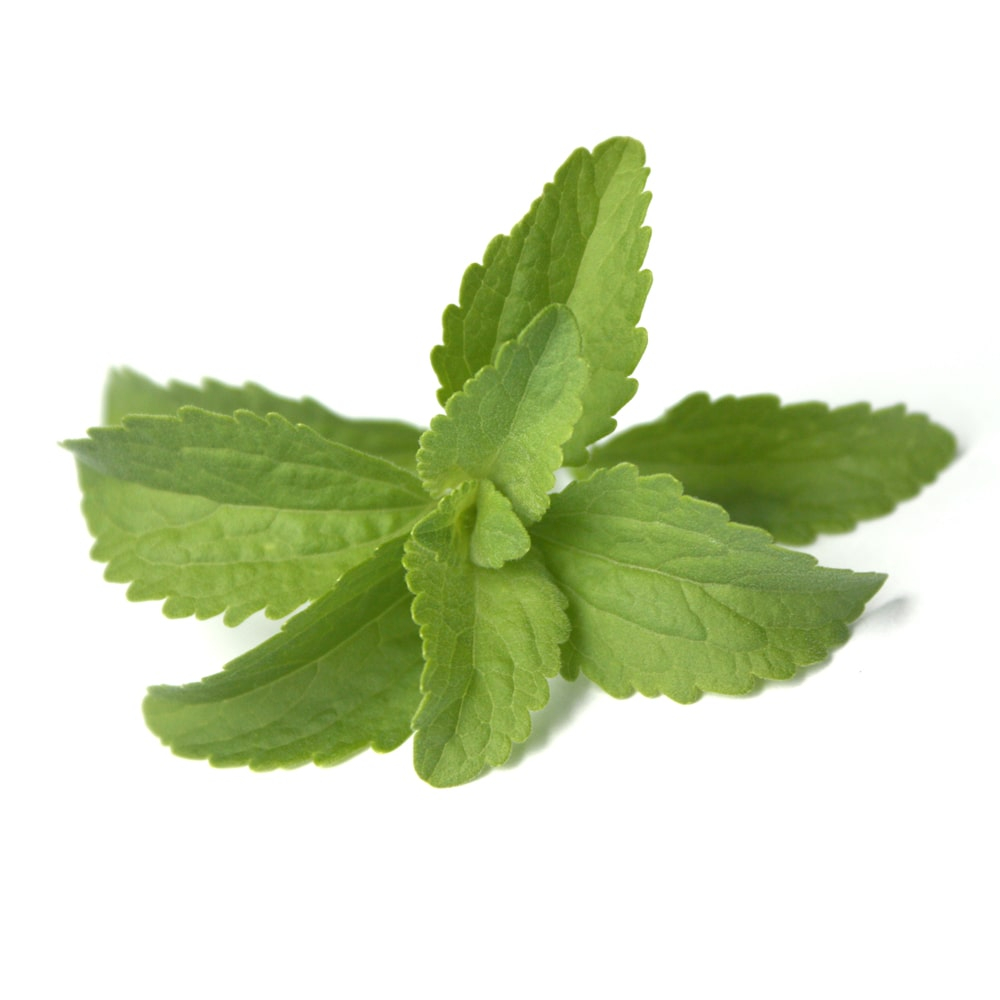 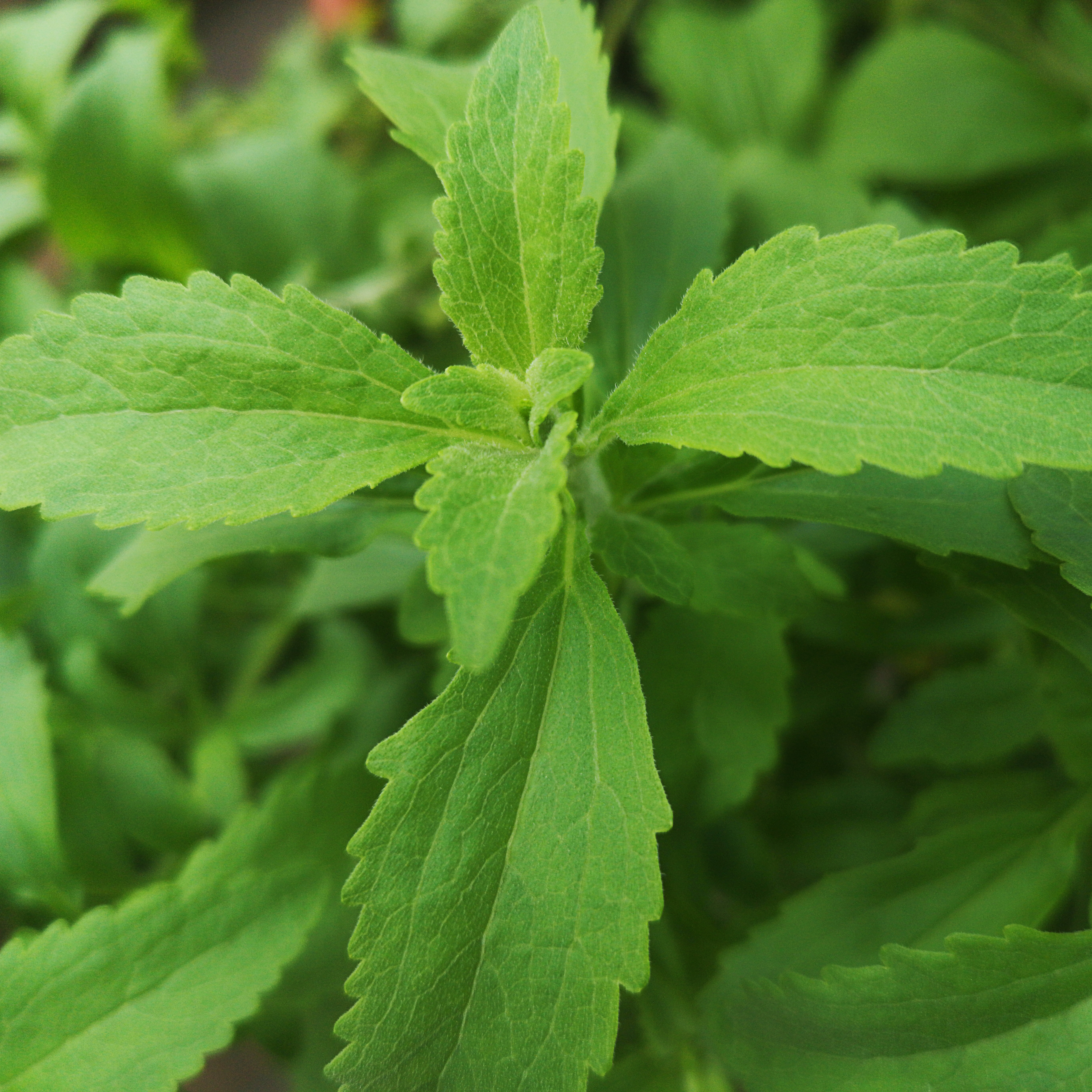 The Stevia rebaudiana plant is a shrubby plant and belongs to the composite family (Asteraceae or Compositae). The Stevia plant is native to Paraguay and prefers sandy soils.

In a frost-free climate, the Stevia plant develops a strong rootstock from which perennial Stevia shoots grow up to one metre high. The Stevia plant is a shallow rooter, which means that the Stevia roots spread out in the upper soil layers in the shape of a plate.

Lanceolate, sickle-shaped, pointed, toothed leaves develop from the stems of the Stevia plant. The light to dark green Stevia leaves, up to 8 centimetres long, are arranged opposite each other and have plant hairs on the leaf surface. Depending on the Stevia plant species, the Stevia leaf shapes can be egg-shaped or diamond-shaped. 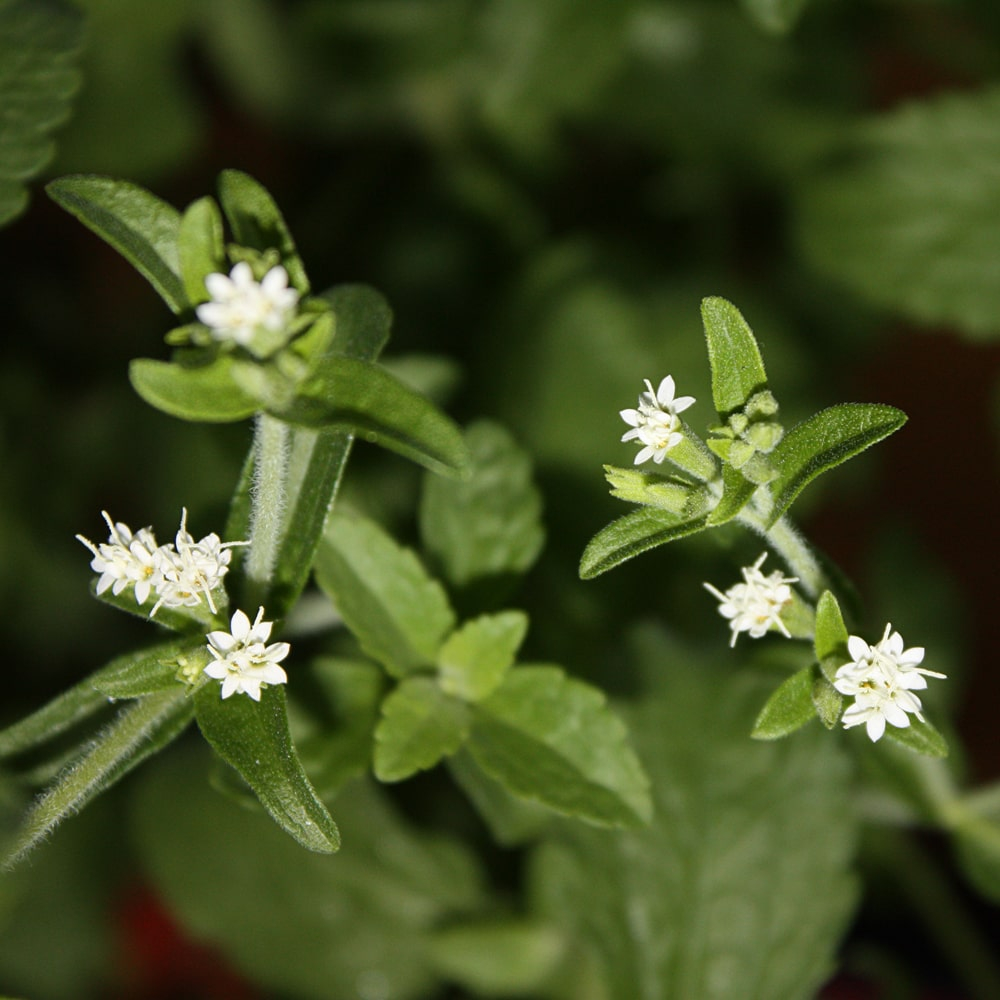 A characteristic of Stevia flowers is self-sterility (self-fertility). This is the name given to plants that cannot pollinate themselves. After pollination with pollen of their own genus (genotype), they fail to produce seeds.

The wind takes over this under natural conditions by carrying the pollen of the Stevia flowers from Stevia plant to Stevia plant and only in this way is seed formation possible. This type of sexual reproduction is also called wind pollination and also occurs in apple, pear and sweet cherry varieties. 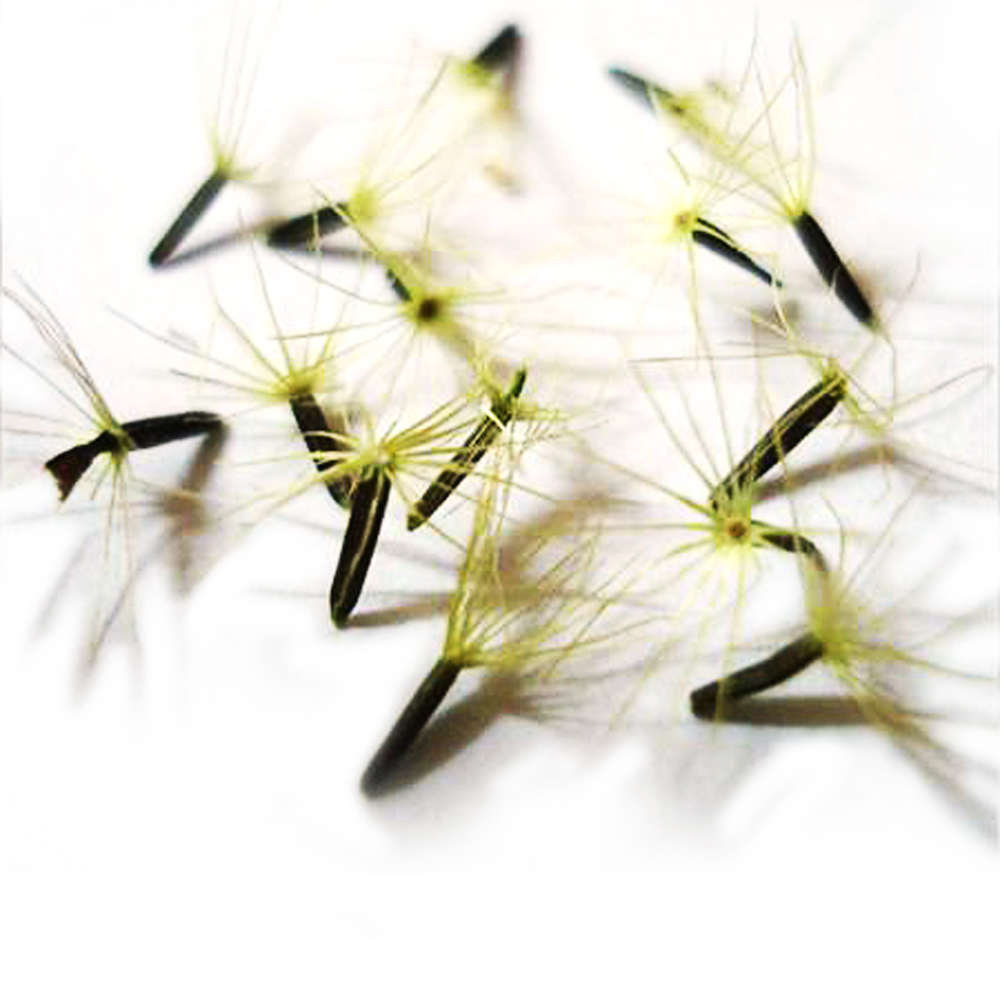 The formation of Stevia seeds

The Stevia seed is about 3 mm long and belongs to the family of the one-seeded sphincter (achene, like the dandelion). The seed of the Stevia plant is equipped with a flighty feather-like corolla of hairs.

After ripening, the Stevia seeds, which form in seedpods, fall out easily.  Stevia is a light germinator and on moist soil the germination time is up to 14 days at a germination temperature of 20-25 degrees.

Vegetative propagation and growing of Stevia

The vegetative propagation of the Stevia plant via cuttings is much easier than getting Stevia seeds to germinate.

Stevia seed is known for its low germination rate of 12 to 15 percent, even with optimal seed. Another much easier way is the vegetative propagation of the Stevia plant via cuttings.

In many nurseries and garden centres today, you can buy a Stevia plant and also keep it in the garden in summer.